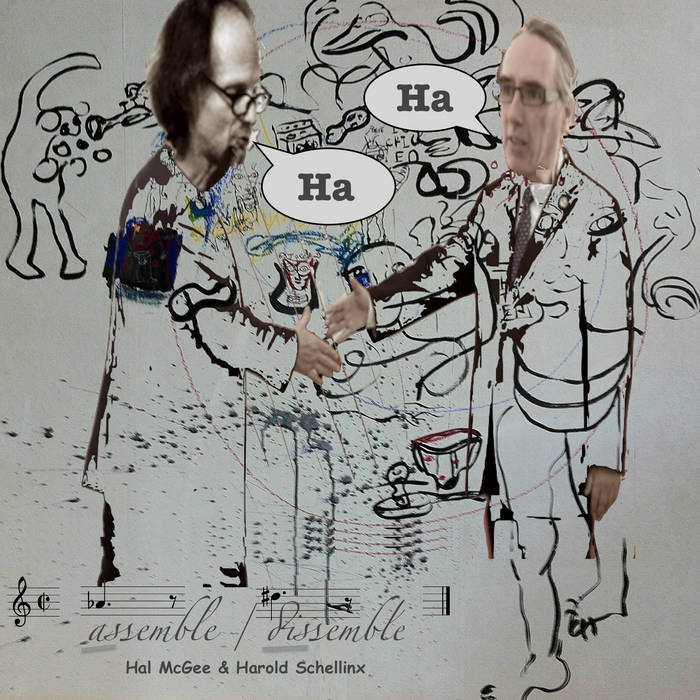 This album is a companion to the collaborative 'December 2020 Report' [ halmcgee.bandcamp.com/album/december-2020-report ], a "dictaphone assemblage" that was created by Hal McGee from the collection of sounds that these 2 Harolds recorded during the month December 2020: Hal did so in Gainesville, Florida, and me in Montreuil/Paris, France.

'assemble / dissemble' uses the same sets of recordings, and also here there's layers of permutations of these 'field recordings' (played back in parallel 'shuffle modes').

In the tracks Dissemble and Assemble you hear (approximately) exponential shifts between the simultaneous (parallel) play of literally hundreds of such random permutations (vertical combinations of the sounds resulting from the horizontal permutations). The resulting massive wall of sound breaks down to (dissemble) or builds up (assemble) from just two layers (that you can think of as the ground level of the walls). Both the layering and play back was done using the live coding tool Sonic Pi.

For the four other tracks, I first made 2 'Hal style' 4-layer assemblages of the sounds, each (like in the 'December 2020 Report') with a duration of 30 minutes.
They might just be the two sides of a C60 compact audio cassette!
This is what inspired their use as if indeed they were being played back on a dictaphone with a 'reverse play' button ... Each of these four tracks then is a 'random walk' that switches back and forth between the A- and the B-side of this (virtual) cassette, similar to (though not the same as) my 'sudoku style' cassette playing. Also these four alternating random walks were scripted and executed in Sonic Pi.